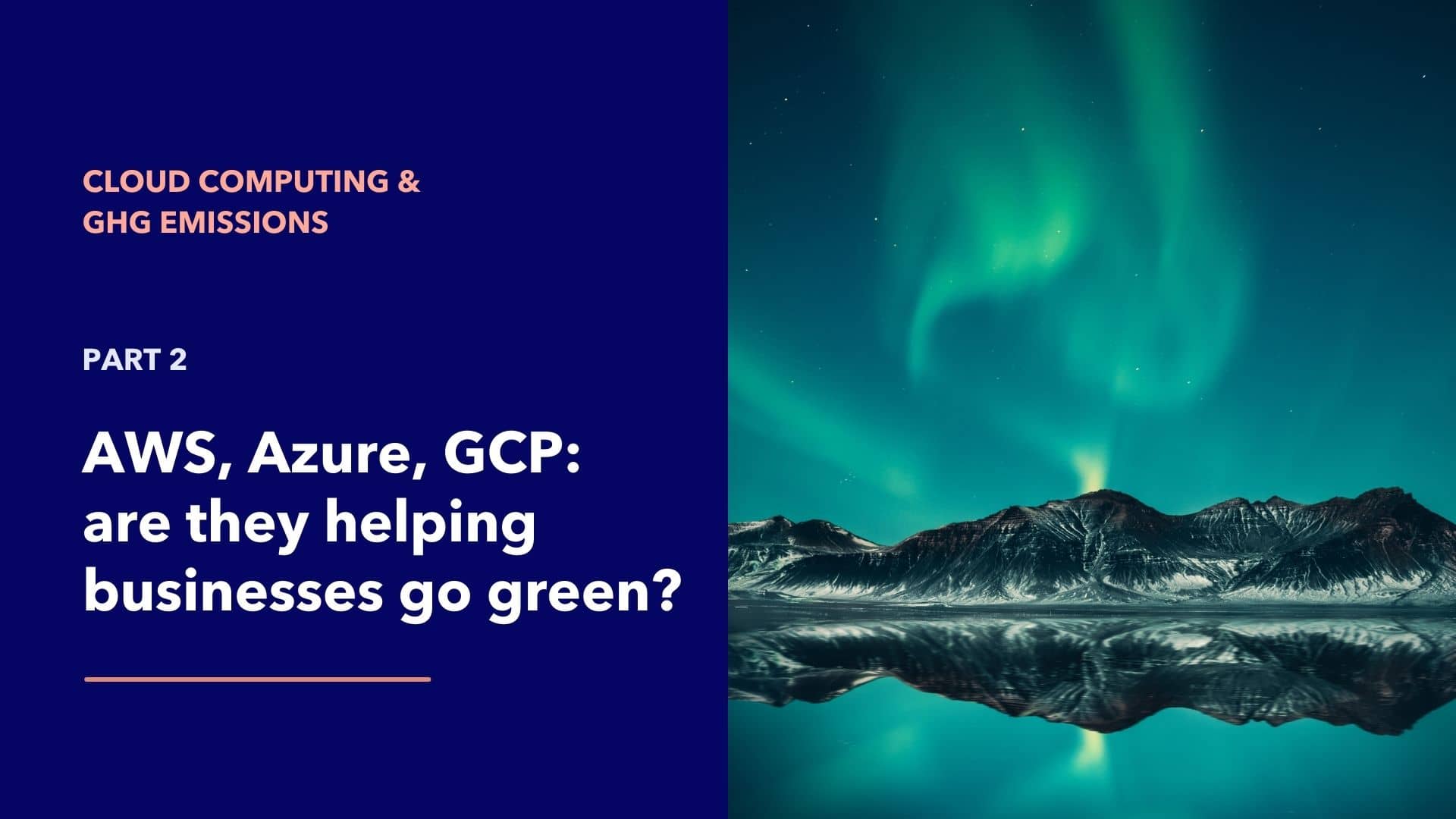 This is our second post in a series of four articles dissecting how to measure greenhouse gas emissions from operating data centres. Today’s post explores the role of the big three, namely Amazon Web Services (AWS), Microsoft Azure, and Google Cloud Platform (GCP) in managing emissions in their data centres, and how they help users make informed decisions about using cloud services.

Check out other posts in this series to learn about A) the primary sources of greenhouse gas emissions in data centres, B) how to assess emissions from your specific computing activities, including on-prem data centres and hybrid set-ups, and C) how to lower your cloud computing footprint. Sign up for our free newsletter to stay up-to-date with new articles.

Outsourcing your tech infrastructure to a cloud provider keeps servers out of sight, and out of mind. The significant environmental impact of running energy-intensive processes is, however, not going to magically disappear when server racks are moved from your location to someone else’s.

The Big Three of cloud providers—Amazon Web Services (AWS), Microsoft Azure, and Google Cloud Platform (GCP)—account for two-thirds of the world’s cloud computing, and though all have pledged to fully decarbonise their data centres, none have completely divested from fossil fuels. They often struggle to determine how best to lower emissions, given that credible emissions data for their operations are unavailable, inconsistent, or lacking transparency.

The Role of the Big Three: AWS, Azure, GCP

Cloud giants may claim to be powered by “green energy'', but in reality they lean, sometimes heavily, on offsets. ESG bodies are already strongly critical of cloud providers which mask their true energy consumption by reporting Scope 2 emissions according to what is called the “market-based approach”. This method estimates emissions from the electricity that a company purchases, which may be different from the electricity that is generated through the local grid. For example, if the local energy grid is powered by coal or another fossil fuel, then the company actually runs on that kind of power. The real carbon intensity of electricity use is skewed by the utility provider who may be purchasing off-site renewable electricity contracts or financial instruments like Renewable Energy Certificates (RECs) which are tradable non-tangible energy commodities. Each REC certifies that the bearer owns one megawatt-hour of electricity generated from a renewable source. Using RECS means that the market-based method assesses zero carbon but this may not be the whole truth.

Using RECs to offset carbon emissions on paper to reach “net zero” goals, while still retaining fossil fuel energy sources is a form of corporate greenwashing, and does not reduce emissions in a meaningful way. True change would come in the form of data centres that use exclusively renewable energy, without any form of fossil fuels.

Conversely, a more accurate, location-based method for measuring emissions of the local power grid does not factor in instruments or contracts and assigns the local grid emission factor to all electricity usage. Such methodology has been developed by Cloud Carbon Footprint (CCF), an open source tool to measure cloud carbon emissions, and made available through the Climatiq API, to estimate the emissions of data centres according to the carbon intensity of the local grid mix.

Select a region in the chart below to see how different data centres compare in terms of carbon intensity.

So how do the green claims of the Big Three stack up?

With over 30% of the market share, AWS is the largest cloud computing provider by far. In 2019, Jeff Bezos joined The Climate Pledge and committed to reaching net-zero emissions by 2040. The company has come under scrutiny for its vague commitments and its reliance on offsetting its carbon emissions with RECs.

In December last year, Amazon announced they will provide AWS customers with the carbon footprint of their use of AWS services, including a forecasting feature to show users how their emissions will fall as Amazon continues to reduce their emissions. The new tool was launched in March and includes scope 1 (direct emissions caused by operations) and scope 2 (emissions from electricity generation) data.

The criticism of AWS’ carbon footprint reporting can be summarised as not granular, not transparent, and not useful to tech teams looking to optimise their usage.

For instance, reported emissions are not associated with the AWS Regions themselves, but instead aggregated into high-level groupings such as EMEA or AMER. The current tool also omits scope 3 emissions, i.e. the embodied and other upstream emissions of cloud services. The failure to disclose scope 3 emissions is something that Amazon is increasingly under pressure to change course on.

Other sustainability analysts have challenged the decision to measure scope 2 emissions using the market-based approach which disguises the real carbon intensity of the electricity used through REC purchases. Amazon is, however, not breaking any rules, since the Greenhouse Gas Protocol allows businesses to use either of these two methodologies, making this a common trick used by organisations to mask their actual environmental impact.

Having access to location-based emission factors, like the ones below, users can make informed choices about deploying their applications to low emission data centres.

In December 2021, Amazon announced 18 new wind and solar energy projects in the AWS regions US, Finland, Germany, Italy, and the UK, totalling 5.6 GW of new renewable energy capacity and a 40% increase from 2020. This, they claim, puts the company on track to power all its operations with 100% renewable energy by 2025 (five years earlier than the initial target). It will be exciting to follow these developments and see AWS taking steps towards real decarbonisation.

Similar to Amazon, offsetting fossil fuel usage through RECs is also a method employed by Microsoft. That being said, the list of activities Microsoft is undertaking to improve its climate impact makes its sustainability claims more credible. This includes, among other things, investing heavily in developing battery technology and fuel cells for its data centres in order to make better use of renewable energy, introducing an internal carbon tax for the Azure team to minimise its climate impact, investing in clean energy projects, and in research meant to increase the energy efficiency of data centres, including a two-year experiment with running over 800 servers on the ocean floor off the Scottish coast.

In addition to reporting on the emissions caused by using Azure services through the Microsoft Sustainability Calculator, the company also discloses their scope 3 emissions (whitepaper PDF), accounting for 97.96% of the company’s total emissions, relating to its supply chain and the products and services it sells, incl. Microsoft 365, Xbox, Azure and Surface devices. It’s worth noting the company saw a 22% increase in scope 3 carbon emissions for 2021 driven by the growth of cloud services and an increase in sales and usage of electronic devices.

Microsoft has also outlined three areas where internal teams are working to drive the transformation toward a sustainable digital infrastructure:

At less than 10%, GCP has the smallest share of the market among the Big Three, but what it lacks in market penetration, it makes up for in sustainability credentials. Back in 2019, the company claimed every workload processed by Google Cloud had zero net carbon emissions, achieved through sourcing 100% clean energy for Google data centres (including RECs). They have also committed to running all operations on carbon-free energy 24/7 by 2030.

Until their 2030 carbon-free goals can be realised, Google is also offering a range of tools and best practices to help companies optimise for sustainability. GCP allows its customers to choose hosting in the region with the highest percentage of carbon-free energy according to their needs.

In addition, the company uses machine learning to optimise electricity usage for cooling servers by fine-tuning settings based on live weather data. The latest product announcement from Google includes a feature named Active Assist which claims to scan your instance for idle workloads and offers recommendations for cleaning up and reclaiming wasted processing power. Google has now bundled all of its emission-related features, including their Carbon Footprint tool, into the Carbon Sense suite, including reporting on carbon emissions associated with your Google Cloud usage.

In GCP regions with little or no renewable energy installations such as Indonesia, Google’s data centres still rely on fossil fuels which are offset, not surprisingly, through RECs. While it might be the smallest player that still has a way to go, GCP is walking the talk and showing giants like AWS, whose commitment to mitigating the climate crisis still leaves a lot to be desired, how it’s done.

For more practical advice on how you can make smarter choices and build climate accounting into the fabric of your organisation, keep an eye on the Climatiq blog. The next two articles in this series will be published soon, and in the meantime, why not learn more about what causes GHG emissions in data centres.