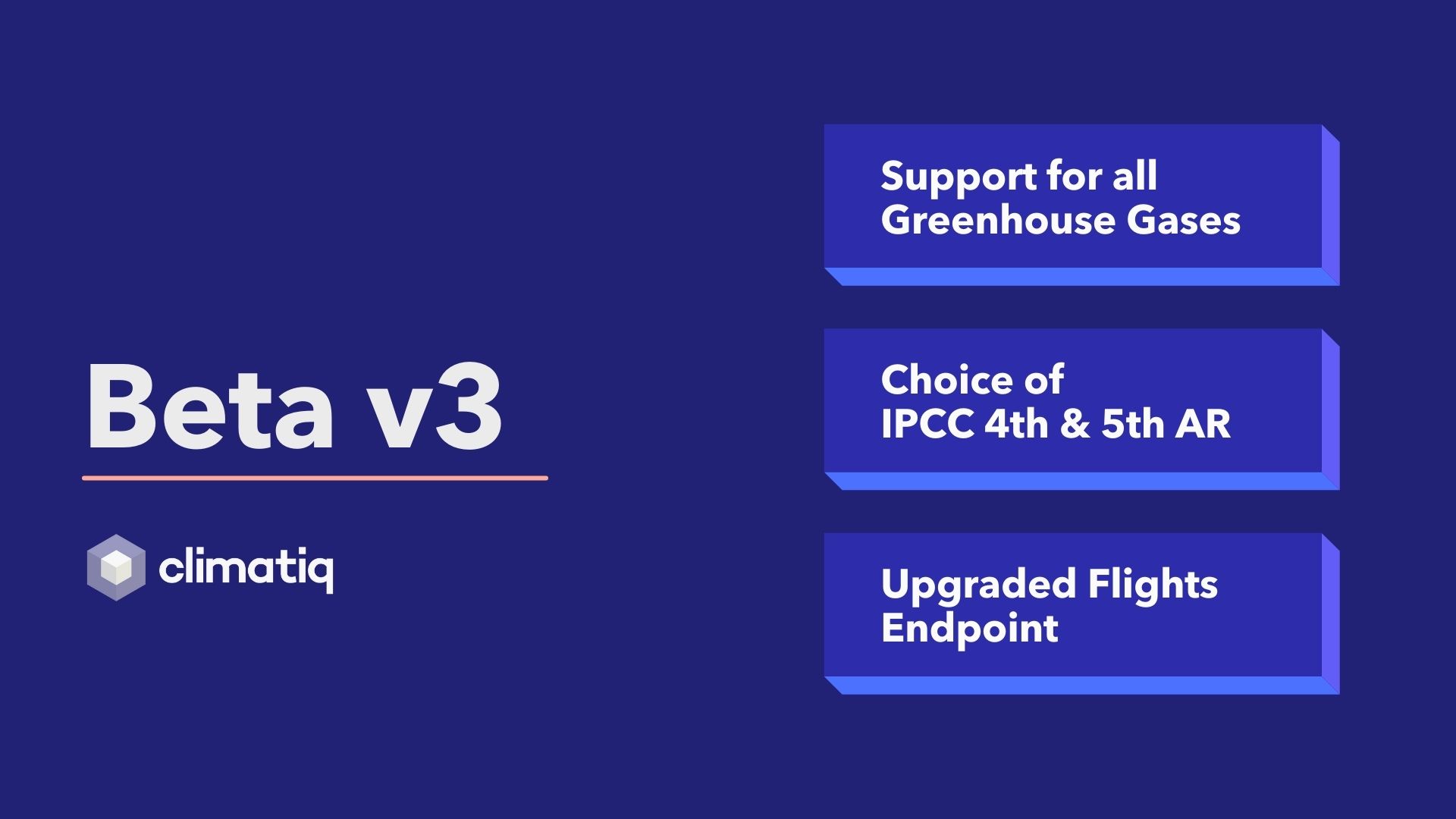 Sometimes a release includes so many upgrades that we decide to "version" it - not least to ensure that it won't break or interfere with existing implementations and allows users to migrate on their own terms. Beta v3 is the final of these versions before we go to production - and we're really excited to announce the following improvements.

Greenhouse Gases: CO2, CH4, NO2 and more are now supported

As of today, Climatiq supports the provision of not just total carbon dioxide equivalent (CO2e) emission factors for understanding total emissions from an activity, but also the volume of constituent greenhouse gases (GHGs) from which that total impact is calculated. This is important, as different gases contribute significantly more to global heating than others. This means that dedicated reductions can have an outsized impact on tackling the climate crisis, such as reducing methane from gas leaks or considering alternative, nitrogen-free fertilisers. This was recently highlighted by the international agreement at COP26 to target the reduction of methane (CH4) emissions in the near-term.

Calculate according to the latest science: Measure using either IPPC 4th or 5th Assessment Report

This release also unlocks the ability for the API to calculate CO2 equivalence on the fly, based on more than one methodology; currently issuers of emission factors tend to use either 4th (AR4 - 2007) or 5th (AR5 - 2013) IPCC Amendment Report, and only a few release both - with none yet releasing 6th assessment (AR6 - 2021). However, nearly all release the “big three” GHGs of CO2, CH4 and NO2, which are how CO2e emissions are calculated, so Climatiq will be able to provide these for the large proportion of data sources. Over the coming weeks you will see more and more of the datasets represented in the API updated to include all this new information.

That’s not all there is in Beta v3. More details can be found in the full release notes below, including on the full release of GHG Protocol factors and a couple of helpful new endpoints for calculating flight emissions with routes broken down into legs and automatically calculated. We also prepared a migration guide for you that includes more detail about how to switch over to the new Climatiq Beta v3.

Though we operate on continuous release, we publish periodic Release Notes that highlight significant product improvements that require “versioning”. Follow us on LinkedIn and Twitter to stay up to date with regular product news and updates.